A downloadable game for Windows, macOS, and Linux

After purchasing an antique mirror, Ivy finds herself playing a strange game...

Reflection is an 02A2 Visual Novel Game Jam Submission!

This game was made in five days by a small team.

"Reflection" is a short horror story about a student studying folklore and the occult.

WARNING! If the topic of suicide is difficult for you, you may not have a safe experience playing this game.

To change your language, go to "Preferences" and go to the "Language" selection.

Content Warning: this game contains strong language, descriptions of gore and murder, mentions of suicide, and drug use.

This game really took a toll on me, despite all the warnings. I knew what was to come, but I was still taken aback. Good luck with what you have next.

Something disturbing is the image of neighbors and even a father who without much consideration lets his daughter have a disastrous end, for a moment it seems something that does not make sense to me until I remember several communities that do not feel safe at home and that really they are not strangers where the family thinks it is best for everyone to get rid of a member who does not follow the canons of the community.

The story reminded me of a tabletop role-playing game called "Wraith, The oblivion" in which the players are spirits of the deceased in a kind of terrible limbo where part of their spirit manifests as a parallel being with all self-destructive thoughts that have had and whose only reason for existence is to self-destruct with the character to achieve oblivion in an attempt to calm their pain.

The ghost in the game seemed more like a specter perceiving the protagonist's darkest ideas rather than directly trying to harm her, seeking to twist the young woman's perception into accepting the sweet oblivion of death as the protagonist struggles to avoid losing control and be at the mercy of the spectrum.

Much more sinister than I expected, it makes very good use of the resources available to it given the limitations of the Jam and they also added support in Spanish, which in fact was what made me decide to give it a try.

Thank you for leaving such a thoughtful comment, it was fun to read! Many of your insights matched my intentions with this story :)

love it thank you :)

I am so intrigued... is there secrets or is the game not done yet?

Reflection is a submission to the O2A2 game jam, which has very stricit limits of using only one asset for every part of the game. It's intentionally short and open to interpretation by the player.

That being said, I'm developing an expanded version which I hope to launch this year :)

and i hope u win the game jam

The game was really interesting ~

I can't believe there's going to be more of this game coming out soon.

It really reminds me of the classic creepypastas and nosleep stories I used to read ages ago. It's creepy, unsettling, and the fact that you just can't go back to play it again really drives up the creep factor. I loved this, and I can't wait to see more of it.
Reply
General_Red97 days ago(+1)

An atmospheric horror VN; really enjoyed the art style and the general vibe. Would definitely recommend it!

This game was a lot deeper than I thought

Quite short but a spooky bite-sized read.

For such a short development time, this game turned out really eerie. Like the narrative gives shivers. Thanks for making it I enjoyed. Here's my video on it if you wanna check it out

Enjoyed this game. The narrative was unsettling which is the best.

Thanks for this game! It was a cool subtle horror experience!

the graphics are pretty!

Reply
Yuezeko161 days ago(+2)
I had a great time with this game! I swear I looked back a couple times because of how unsettling it was! If you're curious about my experience, then you can check out the video on my channel or watch the video I posted here!
Reply
Rangerwolf164 days ago(+1)
Reply
Nakarama165 days ago(+1)

I admit. I am usually not someone who plays these type of games but... this really was interesting.

I love the game, the art was just- so beautiful!

The game is very deep and the intention really shows. The only drawback is that the game is quite short.

played the game and love it just sad it so short love to see more.

I enjoyed the game, loved how you only had a few things to work with yet still told a great story, and the twist at the end was great

really nice short VN, would love too see it expanded on

A very nicely done and creepy VN scene with a lot of promise for the future. I'm not sure the choice adds a whole lot - either put more in or less. :)  Anyway, I hope your next project goes as well!

I souled my soul UWU!

dont let me install cus the thumnail

If you ever decide to expand this into a longer visual novel, I will absolutely play it!

Also made a video feel free to check it out🌚

With this compact story there are endless possibilities. A bit more polishing and endings and this could be one of the best visual novels on itch.io. Also it is worthy of the horror game title thanks to the uneasy feeling while playing the game. Keep going!

MY PLAYTHROUGH OF THE GAME:

Awesome game! I like the detail that you can't visit the mirror twice too!

Great game.  I don't usually play visual novels however I gave this one a go.  Very well put together and enjoyable.  Great character and awesome story line.  Keep up the good work :)

I love the story I would love it more when we could know more about Ivy past. I was hoping for diffrent endings.

The story of this game is definitely pretty decent, it felt a bit rushed which I guess is thanks to the word count limit, there wasn't much tension or emotion in the air, the ghosts recounts of her final moments or Ivy's thrillseeking journey needed more depth to them. I also found the music to be mismatched with the overall tone and scene, the beginning of the track worked well but the orchestral part ruined it and it felt like it cut out at the wrong places when building suspense.

Other than those few issues, the game is definitely good especially for how much time and limitations were paired with the making of the game. I'd rate this game a solid 6.5/10 for sure. 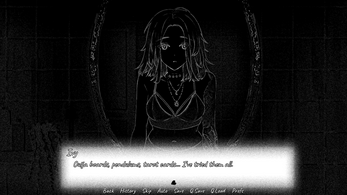 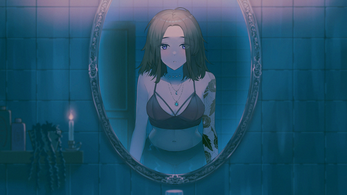 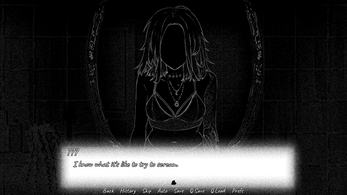